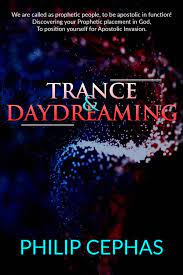 God is not against His children’s daydreams and fantasies about His kingdom and purpose, but it has to be under His government and authority so that the world can be properly improved and healed. Not many people daydream in life, but as many that are called to fulfill a great destiny on the earth under God, they usually find themselves daydreaming about their assignment on earth. You can daydream and fantasize about anything that the mind can grasp as long as it is true, noble, just, pure, lovely, of good report, virtuous and praiseworthy. Trance is yet another healthy prophetic experience that is common among prophetic people, but the lack of awareness and understanding makes it look like a strange manifestation. It is common in the body of Christ that most people do have spiritual experiences, but they can’t accurately differentiate between those encounters whether it is a vision, dream, trance, daydream or spirit transport, these are but a few and with the many manifestations of the prophetic.

DOWNLOAD PDF: The Root of the Righteous by AW Tozer

DOWNLOAD PDF: Two Sides of A Coin by Charles and Frances