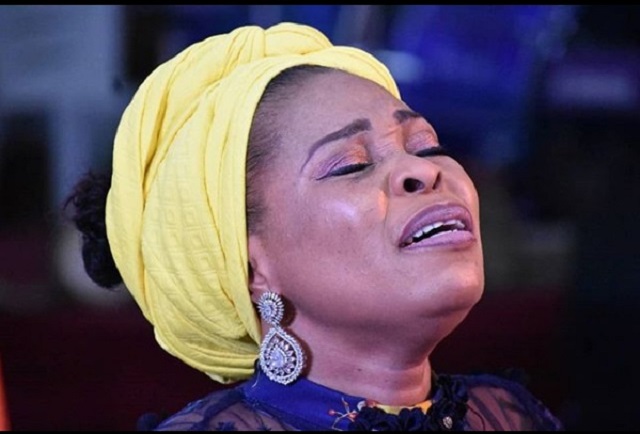 Here’s a list of TOPE ALABI songs so far:

Evangelist Mrs. Tope Alabi is a popular Nigerian gospel singer and actress. She was born on October 27, year 1970. She was born into the family of Pa Joseph Akinyele and Agnes Obayomi in Lagos state, Nigeria, but she is from Imeko in Ogun state. She is happily married and has two adorable daughters. She has dropped a whole lot of singles, ranging from ore ti o common, tire ni, ranti omo eni ti iwo n se, aye le o, Naijiria, and many more.
Currently, she’s working with TY Bello, the popular Nigerian photographer.  Talking about her Education, Tope Alabi obtained her West African School Certificate from Oba Akinyele Memorial High School, Ibadan in the year 1986. Thereafter she proceeded to The Polytechnic Ibadan, where she studied Mass Communication and graduated in the year 1990. Her interest in music and drama led her to join the then “Jesters International group” in Ibadan. It was from there she got initial training and experience in drama.
She worked with the Nigerian Television Authority (NTA) in Ibadan as a correspondent under the supervision of Mr. Yanju Adegbite, between 1990 and 1991. She also worked with center, spread advertising limited illusion area of Lagos in the year 1990. Having had various work experiences, Tope returned into the theater arts profession as she joined the prestigious Alade Aromire theatre group in 1994. She was able to distinguish herself as a gifted and talented actress and singer at the theatre group. She was able to comprehend the core area of drama and acting profession. She was involved in various film productions, stage drama, and most importantly, the soundtrack production with which she delivers well in the Yoruba movie industry.
Today, Tope Alabi has been featured by various Writers, producers and directors in the urban movie industry to write and perform soundtracks for their various movies. She had to our credit till date about 350 soundtracks which she has composed for various yoruba movies. It is equally important to note that Tope Alabi has one of the best setup of soundtracks in the video industry. She has released a lot of albums, as well as single tracks since the beginning of her career. She has been featured in many gospel music by some ministers, including Psalmos, TY Bello, Woli Agba, Tim Godfrey, Mike Abdul, Nathaniel Bassey, to name but only a few. Her life is a testimony. That is why we are her e….. Read her full biography here.